Bloodshed Feared in the Night Cause of loss: Burnt - set on fire

On a cold winters night a large group of non-unionised shearers (strike breakers) slept snugly onboard the Paddle Steamer Rodney, anchored on the Darling River two miles above Moorara Station, on their way to Toolarno Station near Menindee, to break a bitter shearers strike.

Early on the morning of 27th August 1894 the Rodney was boarded by 300 masked men – Union Shearers - intent on stopping the strike breakers, reaching their destination. They forced the Captain, crew and strike breakers ashore and set fire to the vessel.  The detested strike breakers were marched to the unionist camp fearing for their lives and the Rodney burnt to her keel.

A year later the boiler and engine were salvaged but the hull was useless and was dragged to the bank of the river where she now lies. Captain James Dixon lost his boat and therefore his livelihood and moved to WA. The PS Rodney historic shipwreck is of great significance as a physical marker to a violent episode in the shearers strikes of the 1890’s.

The following is an excerpt from the song written by Dennis O'Keeffe about the night the Rodney burned: 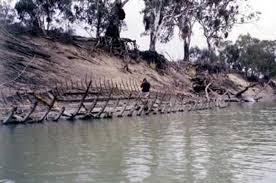 Wreck of the Rodney