Come at once; Mother dying In response to these words of a telegram, without hesitation, newly-married Mr and Mrs William Mackay and William's two sisters, Mrs Elizabeth Cook and Mrs Mary Murphy, left Bowraville for Nambucca Heads to catch the steamer Rosedale that was returning to Sydney. Captain Einersen was keen to depart the Nambucca River as there was an expected change for the worst in the weather and the Rosedale had been on the breakwater there on too many occasions.

After leaving Nambucca Heads on the 15th September, 1911, the Rosedale was sighted off Smoky Cape near the Macleay River. That was the last anyone saw of the ship and its crew and its passengers.

There were a number of Mackay / McKay families living in the Nambucca Valley and the cruel twist to this disaster was that the telegram had been unfortunately delivered to the wrong Mackay family living in the Bowraville district.

A box of butter from the Rosedale wreckage was picked up from the beach at Camden Haven and forwarded to commission agents, Basche and Lowney, Sydney. It had been consigned by the Nambucca Dairy Company and except for a sprinkle of sand, was still in good order and quite sweet. 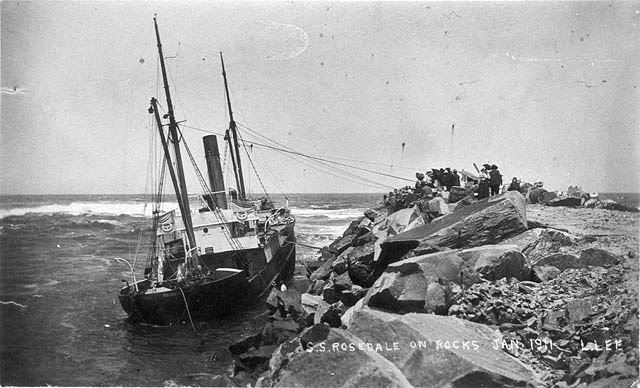 The TSS Rosedale on the breakwater at Urunga, 11th January, 1911.
Thanks to Urunga Historical Society.