HM Sloop Norfolk: An illegal ship and the first to circumnavigate Tasmania It was the first sea-faring ship built on Norfolk Island, a small settlement located 1,673 km from Sydney. As Norfolk Island’s population included convicts, the shipbuilding project was in blatant disregard of a command issued by Governor John Hunter. However, low supplies and disgruntled settlers convinced the Island’s new Lieutenant-Governor, Captain John Townson, to approve the project. Constructed from local Norfolk Pine, the small one-masted sloop successfully arrived in Sydney Cove in June 1798.

However, victory was short-lived as Governor Hunter immediately confiscated the vessel. Refitted, HM sloop Norfolk was then used by Lieutenant Matthew Flinders and Mr George Bass for their circumnavigation of Van Diemen’s Land, confirming the landform was a separate island. Two years after its maiden voyage, the vessel was seized by fifteen convict escapees in Broken Bay, at the Hawkesbury River. The escape attempt failed with the Norfolk ultimately wrecked at Pirates’ Point four weeks later.

Of the fifteen convicts who wrecked the small sloop on Pirates’ Point (Stockton Peninsula), seven were ironically sent to Norfolk Island as punishment. The very place the ship had illegally been built! Made in secret, confiscated, stolen and finally wrecked, the little sloop Norfolk had a short, but important story. 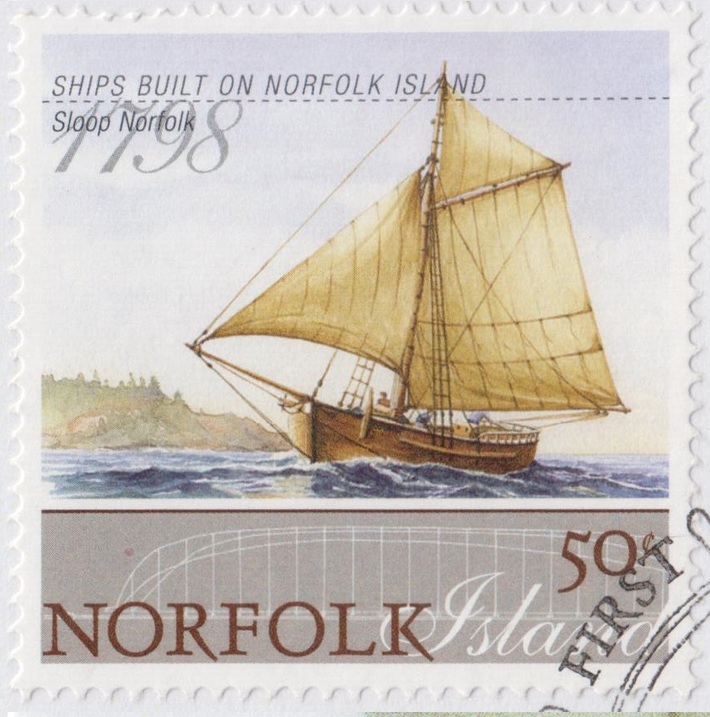 Ship model of HM Sloop Norfolk. Made by honorary ship model maker Col Gibson and presented to the Norfolk Island Museum in 2007. Col made his model from Norfolk Pine, which is also the material used to make the base board. The model’s plans were based on the Navy Department of Deptford’s documentation of a 1770 longboat (held in the Greenwich Maritime Museum).