Paynesville Maritime Museum is the “new kid on the block” and as such probably warrants a little explanation of where it came from, where it is at and what it does. As a first off in the AMMC blogsite we offer a short introduction to PMM, more in detail is on the website www.pmm.org.au. At roughly monthly intervals thereafter we will post some insights into what we are doing and how we do it and are hoping that others will respond and develop a conversation we can all benefit from. toria, a village that depended on the Lakes steamers for sending fish to market and obtaining supplies. The town also evolved to be the major builder and maintenance facility for the steamers until their demise around 1930. Commercial fishing continues even today but is but a mere shadow of its former self as a result of depleted fish stocks and government buy-backs of licences. Now Paynesville is a popular tourist resort, a retirement locale and a dormitory suburb for nearby Bairnsdale. In the maritime sense the emphasis is now on recreational boating and amateur angling.

However the history has given a heritage to be recorded, promulgated and displayed and what is sometimes referred to as the “seventh museum iteration” has actually gotten off the ground and is achieving what the prior attempts, dating back to the 1960s, only dreamt of.

A number of alternative options for locating a museum in the town were studied but none managed to stack up in cost or visitor numbers until PMM obtained a lease to a Shire storage shed in the downtown area at a nominal annual rental. The beauty of this shed was it being adjacent to the major park, a place where the local Lions Club holds a well attended monthly market and a decision was taken to open the display to the public on the same morning as the market occurs. This means that all of the available members can staff the museum for that one day and that no-one needs to sit around on a weekly basis, getting cold, waiting for visitors who may or may not arrive.

This opening schedule has proven to be something of a master-stroke as the number of visitors has been very rewarding. At the initial open day in March 2014 we were thinking that we would be happy to receive 50 to 80 through the door on the major holiday long weekend, only to be almost overwhelmed by the 280 who came to see us. Since then the monthly numbers have been around 100 in the four hours we are open and recent surveys indicate a returning rate of better than 20% coming back to catch up on the latest additions.

Entrance to the museum is free as we want as many people to attend as we can get, too often at venues you can see families walk up to the door and look at the “gold coin donation” sign before walking away. PMM has a donations box prominently displayed and we are rarely disappointed and often surprised at the generosity of the patrons. See video

We have concentrated on showing the story of the steamers and the commercial fishermen and their boats and slowly building the depth of the display as the locals have generously donated the items that the history is made of.

For instance we have been able to obtain a cast iron propeller and other items from the steamers to supplement the story that a picture wall is telling and nets and fishing gear to tell a story, as well as enough hand tools to establish a replica boat-builders workbench. Much prized are two wicker fish baskets in whic 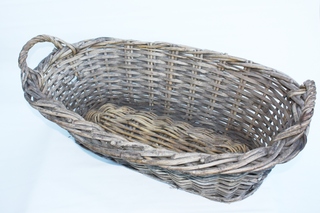 h fish were originally freighted to Melbourne, these baskets ceased to be used around 1900 and we are indebted to the local newspaper for allowing us to mount a campaign that eventually got us our fish baskets. All displays are provided with interpretive signage to inform the visitors and use is made of videos, either direct or via QR codes on Smartphones, for added explanation.

Recently we have been able to obtain material pertaining to recreational boating and angling and additional displays are in progress to expand our range. Among the forgotten gems were speedboat racing just off the town beach that regularly attracted 3-4000 spectators to the town of 350 people and fishing competitions that included competitors from all over Victoria after the magnificent bream that inhabit the rivers and lakes.

Having the “Shed” has given PMM a “window to the world” and a way in which we can reach the community and tell them about the maritime heritage that many have not been aware of. In addition to the Sunday openings we also have arranged visits by clubs, service groups, kindred heritage groups and tour groups.

However, having the displays is just the tip of the metaphorical iceberg and we are undertaking research to find and confirm the stories of Paynesville’s maritime heritage so that a resource will exist into the future from which more displays and stories can be developed. It is sad but true that the present octogenarians are the last who have memories of what they saw and, often more importantly, what they were told by grandparents and we need to access and record as much as possible of this whilst we still can. It is this research that members can get real gratification and peer recognition from with results published in the six-monthly “PMM Journal” that supplements the monthly e-Bulletin that keeps members in touch. Above all we need to maintain an outward view of our work and strive to build the stories of the maritime heritage of Paynesville and communicate them to the community.