Cause of loss: Fire

Location/water depth: Off Geelong in 27 feet of water

The USA-built Lightning, reputably the fastest wooden sailing ship afloat, was loading cargo at Geelong pier when she caught fire early on the morning of November 1, 1869.

Efforts to extinguish the fire at her mooring were unsuccessful, so she was towed out to deep water to protect the wharf and other ships from being set alight. Attempts were then made to sink her by firing cannon balls into the hull and by sawing holes into her waterline. She finally sank in 27 feet of water later that evening.

However, the Lightning had sunk in the fairway and still posed a threat to shipping. Every effort was then made - unsuccessfully – to raise the hull, and finally she was blown up into smaller pieces in April 1870.

Who, or what, started the fire remains a mystery, as though her cargo was insured, the Lightning was not.

On a voyage to Australia in 1862, the Lightning carried a cargo which included the first (23) rabbits to set foot in the new country. Who would have believed that in a few short years rabbits would be in plague proportions with the population spreading across the whole continent? Bell from Romsey Church cargo on the Lightning. Currently in UK for repair. QMM Collection. 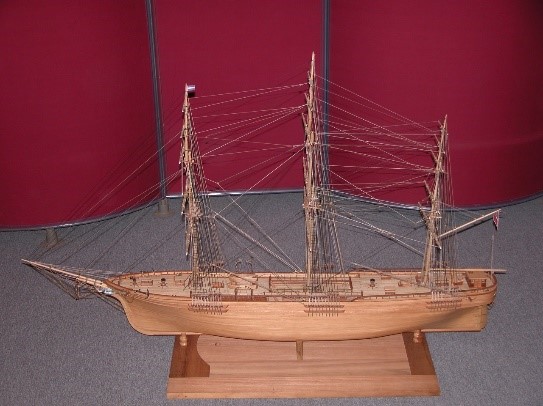 Bell from Romney Church, cargo on the Lightning, QMM Collection