Postcard of the Loch Vennachar

Cause of loss: Crashed into cliffs

Number of Casualties: 26, no survivors

The loss of the Loch Vennachar in September 1905 started a mystery that would remain unsolved for over seventy years.

Extensive wreckage positively identified as being from the Loch Vennachar was found on Kangaroo Island, but the wreck could not be found. A badly decomposed body and heavy wreckage was discovered in West Bay on 26 November.

The actual location of the wreck remained a mystery. It was not until February 1976 that the final resting place of the Loch Vennachar was found, just north of West Bay in 10 metres of water under 30 metre cliffs.

A full underwater archaeological survey of the wreck was conducted by Society for Underwater Historical Research in February 1977.

The sheer logistics involved getting a team of over 3 dozen divers over to Kangaroo Island and set up for two weeks at the extreme western end of Flinders Chase National Park were enormous.

Divers had been searching near West Bay for the wreck when part of a brick was found high upon the cliffs. Knowing that part of the Loch Vennachar’s cargo consisted of fire bricks, the search was successfully concentrated in this region. 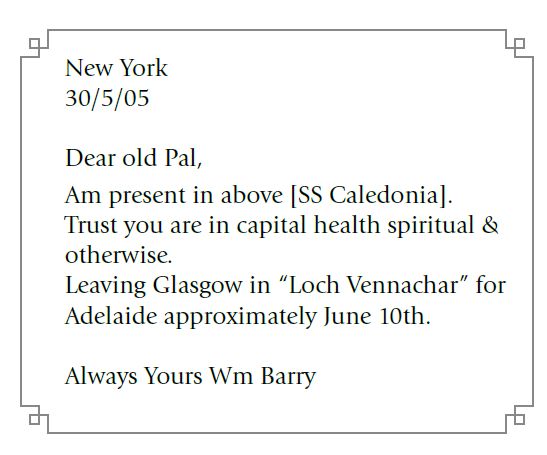 The large bower anchor is on display in Flinders Chase National Park on Kangaroo Island.