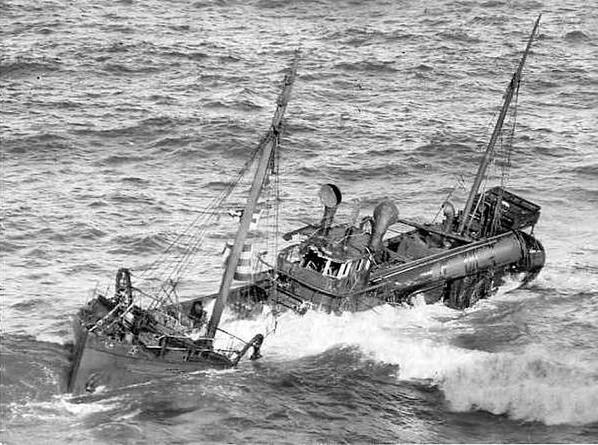 Dureenbee with her funnel blown off, aground on the Richmond bombora north of Batemans Bay.

Cause of loss: Japanese submarine attack, crew rescued, vessel drifted and ran aground.

The raider attacked.  Circling, for 45 minutes cannon and machine guns raked her superstructure, leaving the crippled vessel without wheelhouse, wireless or lifeboat.

The little trawler Mirrabooka, sailed from Moruya on a rescue mission.  With lights ablaze to attract survivors, they risked attack and fought rough seas, courageously rowing backwards and forwards between the trawlers.

Three of the Dureenbee's fishermen died, and were buried with Merchant Navy markers in Moruya cemetery.

Was the Dureenbee mistaken for sister ship Goonambee,  converted to a minesweeper in 1940? Or was it cold-blooded, opportunistic ‘target practice’ for a bored crew?

The vessel drifted for 45k, running aground and breaking her back on the Richmond Bombora, off North Head, Batemans Bay.

The Dureenbee's whistle was salvaged and became the factory whistle at Perry's Timber Mill. Echoing across the township, it was the Bay's default timekeeper for 50 years. HMAS Goonambee, commissioned by the Royal Australian Navy as an auxiliary minesweeper in 1940. Sister ship of the Durreenbee.