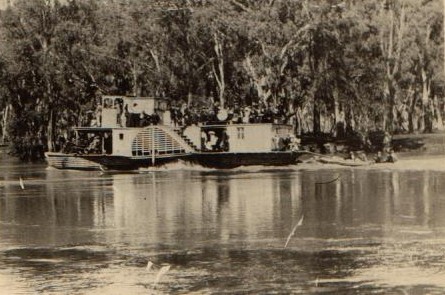 The steamer Wagga Wagga photographed on a day excursion to Willow Bend, 15 miles downstream from Wagga.  50 passengers were on board, and were accompanied by The Town Band.  Captain Sinclair was at the helm.  The boat returned from the day trip at around 7 p.m.  This photograph originally appeared in The Daily Advertiser newspaper on Saturday 3 January 1880

Cause of loss: Scuttling due to hole in hull caused by hitting a snag

The abandonment of the PS Wagga Wagga on the banks of the Murrumbidgee River at Narrandera in 1918 marked the end of an era. For over 40 years, this vessel, the last operational paddle steamer on the Murrumbidgee, had plied the often treacherous waters between Hay and Wagga. Although Australia’s inland river systems lack the high tides and other hazards found in coastal waters, their perils were many, including unpredictable floodwaters, sandbars, submerged snags and receding waters which left boats stranded high and dry.

PS Wagga Wagga, built for the timber trade, carried wool, household goods and sightseers on day excursions.  The much-loved steamer was wrecked on 11 November 1918, but it was not the first time. The river claimed two cargoes in 1881 and a snag claimed a third in 1913. Today, the remains of PS Wagga Wagga can still be glimpsed at low tide in Narrandera.

In January 1881, the Reverend Mr. Dodwell, Hay’s new Anglican Minister, was travelling with his worldly possessions downstream on the PS Wagga Wagga. Unfortunately, the boat sank, and his entire library, his family’s clothes and most of their furniture was lost. The goods were estimated at £400, and were uninsured. Coloured photographic postcard printed by Hunter Bros., Wagga: Steamer at Wagga Wagga, NSW, 1905.  The handwritten inscription down the right side of the image reads ‘This is the steamer that came up from Narrandera twice last year.  Do you remember its visits?  I have often seen it at Narrandera.’  PS Wagga Wagga made its final visit to Wagga in 1905, and after this time, was only used as a pleasure craft for the Narrandera locals in aid of their public hospital.  As you can see in this image, the ‘Wagga’ was built to carry large numbers of sightseers.  The record number that sailed in one excursion was over 200 people. 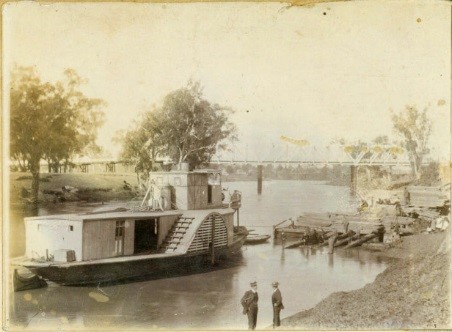 Museum of the Riverina, Wagga Wagga