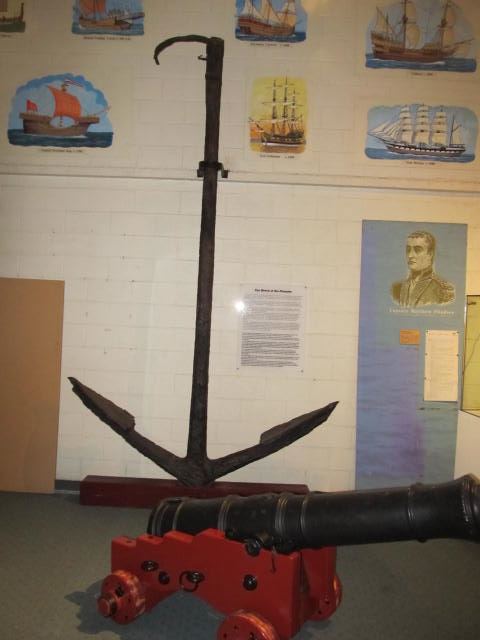 HMS Porpoise Admiralty Pattern Anchor ca1800. The long shank straight armed anchor pre-dates 1840. The ring at the top of the shank was designed for a rope cable not chain.

Cause of loss: Aground on Wreck Reef

During a survey of the coasts of Terra Australis in HMS Investigator in 1802 the ship was discovered to be unsound. Captain Flinders decided to return to England as a passenger aboard HMS Porpoise to seek another vessel to finish the survey.

Porpoise sailed from Sydney in company with the ships Cato and Bridgewater. Porpoise and Cato struck Wreck Reef in the Coral Sea. 94 men from both ships survived and set up camp on the sand cay and 3 months’ provisions were recovered from the hulk of the Porpoise as well as most of Flinders’ surveys and journals.

Taking a cutter and 13 men, Flinders set off to sail and row 1500km back to Sydney promising to return with a rescue ship within 2 months. They landed at Stradbroke Island where they met indigenous people. Sydney was reached and Flinders returned to Wreck Reef six weeks after his departure.

Australia in the balance

Baudin was also surveying Terra Australis for the French. A principle part of Flinders’ commission was to thwart any French ambitions. On his safe return to England, Flinders published his chart of the continent and named it Australia. Had Flinders perished with the loss of the Porpoise or during the boat voyage or, his survey work been destroyed the name Australia may never have eventuated. Parts of the continent may have become French territory.

The Queensland Maritime Museum has one of the anchors from Porpoise on display.